We worked with Otto Studios to produce a marketing video for  Murray River Golf Retreats.
I really enjoyed working with Anthony and team throughout the entire process from creating the script, the 2 days of shooting and the finished product was better than I had envisaged.  What I love about working with Anthony is his ability to find ways to get the result no matter what unplanned situations arise Anthony remains calm and focused and rises above any challenge.

We recently purchased a Canon C100 to integrate into our selection of cameras.  My initial thoughts were similar it seems to many others….great pics, reasonable ergonomics….but crappy (almost unusable) DSLR inspired viewfinder!  Yes, although the LCD screen on the back of the camera is quite good, there are times when you are shooting outdoors, handheld in a sunny situation…and even shading the LCD doesn’t quite cut it (we use a Hoodman H-400 LCD hood for that).  Plus, personally I have difficulty focusing my eyes on the rear mounted LCD when it’s too close to my face due to my ever deteriorating long-sightedness :/

One obvious solution is to buy something like the Zacuto EVF and use this unit instead of the built in viewfinder.  We already own one of these and this combination does work great, but often there is a need to have a small, stripped down kit, without all the peripherals.

So after googling various C100 owner’s solutions, I decided to simply try pulling the eyecup of my Zacuto Z-finder and trying that….and what do you know, it fits!

Not that I’d call it an exact fit, but the rubber ring from the Z-Finder’s eyecup wraps nicely around the rubber outer of the C100 viewfinder and holds in place ok.  It’s still easy to pull it off if it gets in the way at all or you have to adjust the diopter dial underneath.

So now we have a simple and quick solution to make the C100’s viewfinder actually useable, by providing the required shade and also that important 3rd stabilising point of contact required for small camera handheld operation without extra rigs & shoulder mounts. 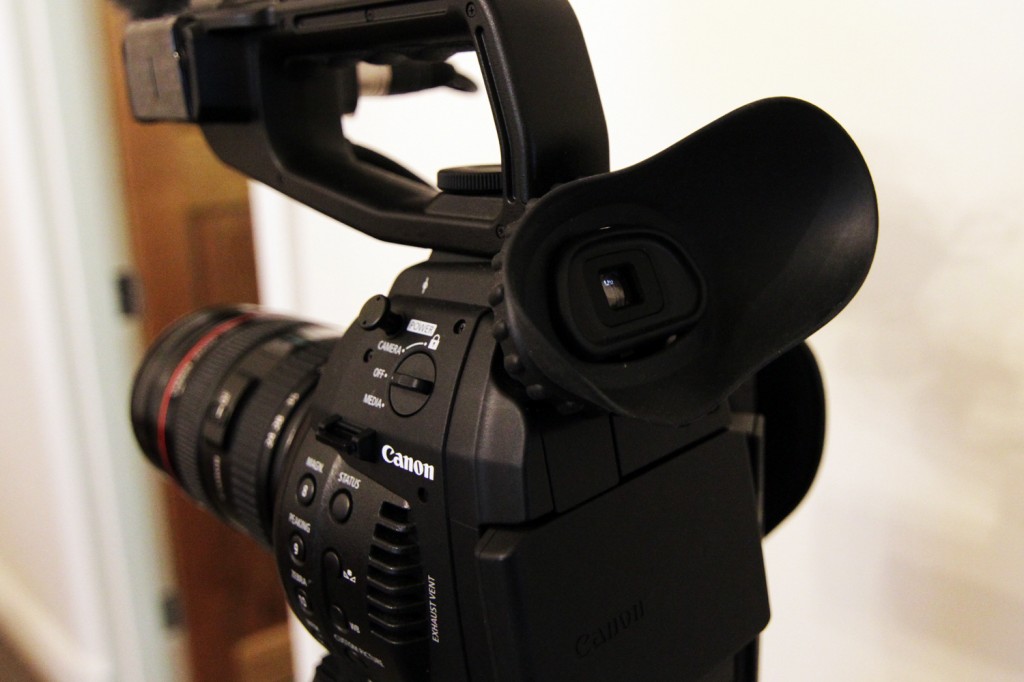 A couple of months back, our crew was shooting a big wedding production; three camera operators over 18 hours using a mix of Canon DSLR’s, XDCAM and AVCCAM cameras and a same day edit in the mix just to keep things interesting.  The day ran smoothly and the following week, we proceeded with our backups as usual….running our various card readers through a powered USB hub into the mac and simultaneously transferring our footage to multiple mirrored drives with byte verification using Shotput Pro – a flawless and safe process to this point.
This time, however after already successfully backing up a couple of cards (a mixture of SDHC, SXS and CF), I inserted a compact flash card into a reader and up popped a message ‘This disk you inserted was not readable by this computer’…with the option to Initialize, Ignore or Eject.  My heart skipped a beat and (not sure exactly which card it was referring to) I quickly removed all of the compact flash cards from the readers.  I immediately scanned the reader slots for bent pins and did actually find one in one of the cheaper readers.  Not wanting to risk any card corruption, I binned the reader straight away and proceeded to re-insert the cards to continue with the backup.  I nearly lost it when upon slotting a different card into one of the ‘good’ readers, the same error appeared again.  My assumption was that this must have been the card that was originally inserted into the other (trashed) reader, so I removed it and inserted a different card…BANG!…error message again! Crap! This must be the bad card reader.
That’s right, out of nowhere one of my compact flash card readers had gone bad and begun frying cards containing my precious (yet to be backed up) footage.  This was the ultimate nightmare for any photographer or cinematographer…an unrepeatable shoot and the risk of losing some of that irreplaceable footage from card corruption 🙁
The dodgy reader wasn’t a cheap and nasty unit…I’d purchased it from a reputable supplier at a cost of around $30 and didn’t think I was skimping on equipment at the time.  However, rather than risk it I promptly took all of the readers of that make & model that I owned and returned them to the store, replacing them with the highest quality Lexar readers that were available.

I backed up the remaining cards without a hitch.  I then went about trying to recover my corrupted cards.  Numerous attempts and approaches yielded no joy.  I tried software from both Lexar and Sandisk (those which I’d had good experiences with in the past) and also tried to mount the cards on a Windows machine with no luck.  As it turned out, one of the cards had already had the footage transferred through the process of ingesting shots for the same day edit on the shoot day, so I decided to experiment a little more with this particular card to see if I could actually repair the damage to the card’s directory structure with disk repair utilities.  The repair worked, however it resulted in a format, which was not the result I wanted for the other card.

My next step was to Google and call data recovery companies in order to make a decision on who I would entrust with retrieving my important data.  I decided on one of the larger companies and dropped my card off to them.  Alas, they had no joy….the card was returned to me (no fee was charged, but that didn’t help the situation) and I was told that the card’s physical memory component was damaged.  Although hope seemed lost, I wasn’t convinced…I began to trawl the net, trying to learn something about varying types of media corruption and what could be done.  I found some information on NAND chips on memory cards and also some mention of recovery services through which the chip could be physically removed from the card and data forensically recovered through specialist hardware and software combinations.  I felt a glimmer of hope…although this was accompanied by a fear of what this type of process (if it worked) would cost.  I made some phone calls to various recovery companies around Australia to ascertain whether they provided this level of service and associated costs.  I wasn’t having much luck until I stumbled across this little website www.getmydataback.com.au .  I gave them a call and found that they were a small IT company based in Tamworth who really knew their stuff when it came to data recovery and had been doing it for quite some time.  I was convinced to package up my card and sent it to them by registered post.
A week past and I then received one of the best phone calls I’ve ever experienced….they had recovered the footage!  WOOHOO!  Apparently they cracked the card open and performed numerous tests, including exposing the chip to high temperatures all of which culminated in them being able to access and retrieve my data.  The footage was copied to a memory stick and posted back to me, all for under $300 including the postage and the stick.  I was one happy and relieved camper 🙂

So what have I learned from this experience?

1. Don’t skimp on card readers, especially when it comes to compact flash cards.  All of those pins are asking to be bent if the card doesn’t slide into the reader with as solid a feeling as if you’re sliding it into a camera.  The Lexar readers seem as solid as a rock.

2. Sandisk CF cards apparently have an automatic proprietary encryption applied to data saved on the card (the recovery guys told me this).  This can make it harder to recover data from these cards.

3. The guys at getmydataback.com.au / Tamworth IT rock 🙂  And they’re a small business – great to deal with.

Welcome to the long overdue first blog post on our Otto Studios site.  My intention with this blog is to hopefully enlighten some readers with some solutions to good and bad technology experiences that we’ve encountered in our professional video/film/creative situations and also provide some useful ‘how to’ and behind the scenes info on our company.

Please let us know if there’s anything you would like us to write about and we’ll see what we can do.

Soon, we’ll drop some posts about our team and our brand new studio in beautiful Hahndorf in the Adelaide Hills.

Anthony is a terrific audio-visual storyteller and his company Otto Studios has produced most of our work coming out of Adelaide.  He’s affable, honest, professional, has a superb understanding of his craft and what clients need and the capability of efficiently delivering it.